As Bostonians prepare for winter, summer is just beginning in Australia — along with the combination of heat, aridity, and bushfire season which is proving to be devastating. As of January 10th, there were 132 fires burning in the state of New South Wales, 55 of which remained uncontained.[1] A frenzy of fires along Australia’s populous eastern coast in the first week of January made headlines worldwide, but fires have actually been blazing since September and are projected to continue through February, at a minimum.[2] Effects on human life, biodiversity, and infrastructure are already staggering. In the last four months, over 17 million acres have burned, killing dozens of people, harming more than 1 billion animals, and destroying thousands of homes.[3],[4] Moreover, Australia has a sizable population of indigenous First Nations peoples, who consider much of the land at risk to be sacred.[5] However, the true scale of loss cannot be estimated at this time, as the residual effects on physical health, mental health, industry, and the environment will compound even after the fires are extinguished. 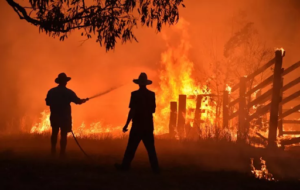 Attempts to corral and mitigate the flames are well under way, as army reserve troops and volunteer firefighters have been deployed as first responders. The aim is to contain burns — but not completely douse them — via dissemination of water and fire retardant from both air and land.[6] Heavy rains on Monday offered a brief respite from the heat, but did little to allay the effects of the bushfires. A spokesperson for the regional New South Wales Rural Fire Service noted that, because of the intensity of Australia’s drought, only consistent precipitation over the course of multiple weeks will be enough to reverse damaging impacts.[7] Furthermore, while the flames themselves can be targeted, the more challenging opponents are the embers. Strong winds of up to 80 mph carry embers from active fires to previously unaffected locations, where they then lodge in brush and vulnerable structures, instigating satellite burns.[8] 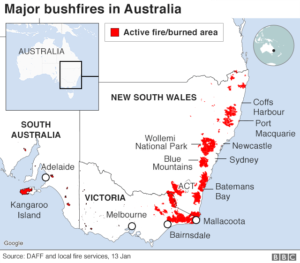 Firefighters from Canada, New Zealand, and the United States are assisting with the disaster, though an unfortunate side effect of international assistance identified by the Global Resilience Institute’s Wildfire: A Changing Landscape report can be the difficulty of learning about local conditions as an outsider, in real time. In addition to responses by land and air, ships at wharfs and waterfront marinas are being used as evacuation mechanisms, with authorities estimating that this is the largest “peacetime maritime rescue operation” in Australia’s long history.[9] In hopes of alleviating some of the economic pressures residents will face, the Prime Minister has also established a $2 billion (USD) recovery fund dedicated to rebuilding after the bushfires.[10] 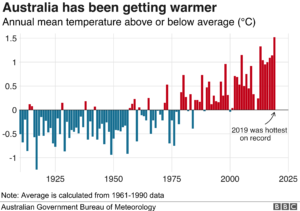 Unfortunately, for the reason, the fires have been worsening over time. Since 1910, Australia’s climate has warmed by 1°C, a seemingly small numeric increase, yet one with a massive impact.[11] An already arid environment, Australia has faced the brunt of climate change’s wrath. Heat waves become more prevalent, as do droughts, and both effects contribute to desertification, otherwise known as an irreversible drying out previously fertile land. The process of desertification is exacerbated by well-meaning attempts to control bushfires via the widespread clearing of plant growth, which effectively launches a vicious cycle of perpetuated droughts leading to harmful fires. [12] Though Australian police departments have been pursuing legal action against alleged offenders of fire ban noncompliance, wildfire researchers warn against dwelling on arson, as it typically is not a primary cause, and rather suggest an increased focus on efforts to mitigate climate change.[13],[14]

Wildfires are natural occurrences, and can never be fully avoided. Regardless, there are steps that can and should be taken to ensure that the potential negative impacts are kept to an absolute minimum. Coal production is widely known to be a harmful contributor to nations’ carbon footprints, and though Australia is the world’s largest exporter of coal, very little has been done on a governmental level to curb its contributions to climate harm.[15] Concerted commitments to limit greenhouse gas emissions, pollutants, and contaminants on a large scale are imperative at this point in time. Secondly, research on the impacts of prescribed burns has shown that regions with prior prescribed burns accrue fewer costs for fire suppression than those without.[16] For centuries, First Nations peoples have held cultural burns, and regional governments are gradually including representative parties as expert environmental consultants, with Victoria hiring the first Indigenous cultural burns planning officer in 2016. [17] Finally, a proactive focus on resilient infrastructure and landscape design can significantly decrease the ability of wildfires to spread. National building standards were last updated in May of 2019, and will impact construction projects going forward, but it will be difficult to address older structures. [18] Homeowners tend to prioritize controlled vegetation, but the real danger lies in the foundation of their properties. When the commitment to preparedness and prevention is greater than collective response efforts, the damaging impacts of wildfires in Australia will decline.

If you would like to monetarily assist to the Australian Wild Fires, below are a few options to send donations.