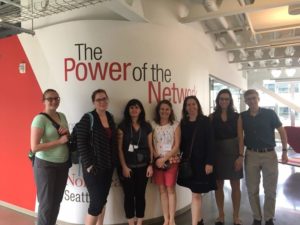 Global Resilience Institute (GRI) Director for Strategic Research Collaborations Dr. Jennie Stephens and Doctoral Research Assistant Maria Robson taught a three-day course at Northeastern University’s Seattle campus in Seattle, Washington, in late June. Each day of the course had a distinct theme to introduce participants to a variety of concepts, research, and initiatives within the realm of climate resilience, energy justice, and security. The course involved a variety of interactive activities and field trips and was attended by a variety of individuals from the public and private sectors, including representatives from Washington State, Oregon State, and multinational companies.

On the first day, participants were welcomed by Uta Poiger, Dean of the College of Social Science and Humanities (CSSH) at Northeastern University. Dean Poiger engaged participants on the topics of Northeastern’s focus on resilience through the establishment and growth of the Global Resilience Institute and the university’s emphasis on building partnerships and expanding its presence in the Seattle region. The first day’s content then involved a presentation by Dr. Jennie Stephens on the renewable energy transformation and the importance of community engagement and equity within efforts to build resilience to changes in climate and in energy provision. Jill Brandenberger from Pacific Northwest National Lab then engaged participants on the topic of regional climate impacts, drawing the connection between climate risks and national security.

The afternoon involved participants getting to their feet for a walk to the Bullitt Center, dubbed “the greenest commercial building in the world”, which is designed from basement to roof to maximize energy efficiency and provides electricity into the grid through solar panels on its roof. This was followed by a session led by Maria Robson on Barriers to Resilience. GRI’s research on barriers to building resilience in the Pacific Northwest struck a successful but unfortunate cord with participants who are all-too aware of infrastructural and institutional challenges.

After the day’s content concluded, the Northeastern Seattle campus hosted a reception for all participants, where they had a chance to chat with Dean Poiger and with Natasha Frost, Associate Dean for Graduate Studies at CSSH. 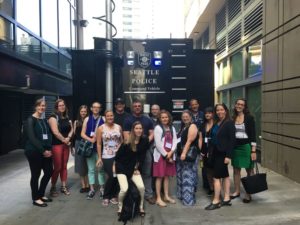 The second day was focused on security and on disaster preparedness, beginning with a discussion of the risks posed by a Cascadia Subduction Zone earthquake, which has been the focus of substantial GRI research (and a workshop held by GRI in Tacoma in September 2017). This day attracted additional private-sector participants from organizations that are concerned with ensuring their own preparedness in the event of an earthquake. After discussing Cascadia, the group went on a tour of the Seattle Police Department’s Mobile Command Vehicle and Operations Command Center. After the visit, the class returned to the Northeastern campus to enjoy a presentation by John Schelling, Emergency Management & Safety Administrator, Washington State Department of Commerce, who spoke on “Learning from the Past to Protect the Future: Creating a More Resilient Washington.” He was followed by Barb Graff, Director of the Office of Emergency Management, City of Seattle, who spoke on Resilience by Addressing Vulnerabilities, with a specific focus on disadvantaged residents in Seattle who live in Unreinforced Masonry Buildings and are therefore at a higher risk from a Cascadia earthquake. The day concluded with an interactive activity in which participants were presented with articles on climate risks and on earthquake risks and shared their thoughts on the current risks and possibilities for building resilience.

On the final day, Dr. Stephens led participants through an examination of technological and social innovations and energy system change, referring to the case study of Puerto Rico. This was followed by Uzma Siddiqi, Technology Innovation Principal Engineer at Seattle City Light, who led participants through developments in Seattle City Light’s micro-grid project. This was followed by a tour of Northeastern Seattle’s LEED-certified building, in which resident architects led participants through the building’s features, including cooling, lighting, greenery, and little indicators on the staircase to inform stair-climbers of how much energy they have saved by forgoing the elevator. After this visit, participants returned to the Seattle campus for a final interactive activity, in which they divided into two groups and presented their own innovative proposals for strengthening resilience. Participants came away from the course asking for more materials, and commenting on how much they had learned about climate resilience, energy-efficient building design, infrastructure challenges, and on the potential learnings from each other’s experiences within different sectors that face different responsibilities — but common challenges. 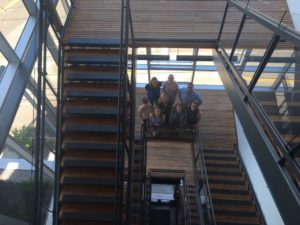