Community resilience requires action.  And in communities “action is at the speed of trust” (Sherri Moore of the USACE).  As I’ve pointed out before, trust must be based on shared experiences, shared successes, a shared vision.  Eugene Tan in Singapore calls this a “Master Narrative” – a common understanding of who we are, and how we’ve come to be.

In a few of my past essays on resilience I’ve pounded the drum about the importance of constructing a community narrative.  But accepting the importance of Narrative and being able to build one aren’t the same.  Our world has been shaped by those who were able to tap into Master Narratives, both evil and good:  Hitler, Churchill, Gandhi, Martin Luther King and others.  In the following, I’ll provide a few thoughts to help those of you who are trying to make your communities more resilient.

The Socratic dictum (applied to community).  First and foremost, know your community.  Know its strengths and capabilities, and its history.  Knowing your community also means understanding its composition – ethnic, racial, economic.  Learn where the fault lines are.  Learn what each group cares about and what its concerns are.  Ideally, every group will hear an echo of itself in your community narrative.

For those of you old enough to remember Bill Murray in Stripes, his speech before the basic training graduation ceremonies is a masterful (and funny!) example of this.  He knew the men in his training company and how to push their buttons.  In his call to action to get them ready to march, he embedded a bit of the American Master Narrative:

“So we’re all dogfaces, we’re all very, very different, but there is one thing that we all have in common: we were all stupid enough to enlist in the Army. We’re mutants. There’s something wrong with us, something very, very wrong with us. Something seriously wrong with us – we’re soldiers. But we’re American soldiers! We’ve been kicking ass for 200 years! We’re ten and one! Now we don’t have to worry about whether or not we practiced… All we have to do is to be the great American fighting soldier that is inside each one of us.”

The first President Bush in both accepting his party’s nomination and in his inaugural speech provided another example of speaking to every part of the community.

“We’re a nation of community, of thousands and tens of thousands of ethnic, religious, social, business, labor union, neighborhood, regional and other organizations, all of them varied, voluntary and unique.  This is America: the Knights of Columbus, the Grange, Hadassah, the Disabled American Veterans, the Order of Ahepa, the Business and Professional Women of America, the union hall, the Bible study group, LULAC [League of United Latin American Citizens], Holy Name, a brilliant diversity spreads like stars, like a thousand points of light in a broad and peaceful sky.”

The vision thing. This speech also is important for another reason – it speaks to a shared vision.  The elder Bush was a practical man focused on the problems of the day. He and his sons have been maligned because they “did not have a vision.” However, this speech is well worth remembering today for what it says about our sources of resilience and for the vision it propounds.

Another example.  Martin Luther King was one of the greatest speakers of the ‘50’s and ‘60’s.  Perhaps his greatest effort was his “I have a dream” speech.  It spoke to the hopes and dreams of Black Americans and resonated with a group still largely influenced by their evangelical churches.  Less recognized than his stirring conclusion is an earlier passage:

“When the architects of our Republic wrote the magnificent words of the Constitution and the Declaration of Independence, they were signing a promissory note to which every American was to fall heir.  This note was a promise that all men, yes, black men as well as white men, would be guaranteed the inalienable rights of life, liberty and the pursuit of happiness.”

While this also spoke to the hopes and dreams of Black Americans it reached out to all Americans as well.  Even the tone deaf who could not appreciate the rhythms of the speech – and had not yet been made cynical by the Vietnamese debacle – heard beliefs and values that they shared.  King acknowledged that blacks and whites were different while stressing that each was a part of something greater.

Past successes as harbingers of the future.  Resilience is built on strength.  The Narrative needs to inspire confidence that the community can deal with whatever Fate or Nature serves up.   Pointing only to past or unredressed wrongs or vulnerabilities – or, especially, playing the Blame Game – focuses the community’s attention firmly on a past where it was ineffective or impotent.  Far better to honestly acknowledge present problems with confident optimism that “we will do better because we can do better, and we are better than this.”  Or, as Winston Churchill said, “…if we open a quarrel between the past and the present, we shall find that we have lost the future.”

Churchill, in fact, was a master of this.  Especially during the darkest days of World War II, he continually reminded Great Britain and the world of Britain’s long history of past successes.  Often with just a phrase, but enough to recall former triumphs.

Trajectory, not snapshot.  All of us occasionally want to shout “Stop the world; I want to get off!”  And yet opinion polls remind us that our confidence in the future is not based on the absolute of our Present but rather on our perception of relative motion toward a better Future.  The wages of middle class America have stagnated most of this century – until recently.  And Middle Class America’s confidence in the Future has followed the same trajectory.  Hitler, for all of his Evil, was a master at weaving successes into a narrative that carried the German people along with it.

Keep the Narrative current.  Having crafted a Narrative that resonates with the community, it is too easy to become complacent – to accept that “if it ain’t broke, don’t fix it.”  And yet, we know that memories fade.  By incorporating recent triumphs in the Narrative we’re helping to ensure that the Narrative isn’t drowned in the torrent of noise we’re all subjected to.  It also doesn’t hurt to include a celebratory note in the call to action.

Ultimately, our calls for action to our communities to become more resilient must inspire trust if they are to be heeded.  Drawing on a Master Narrative is a way to build that trust.  It is easy to describe the steps to take; but the first is the most important – and the most difficult:  knowing the community and its history.  If we can do that, we can move our communities to take action.

How rich are the “richest?”

The US Congress recently passed a new tax bill.  Unfortunately, it has been highly mischaracterized by the press and by Democrats and Progressives in general.  In fact, at least 80% of US families will benefit by paying lower income taxes.  However, I thought it would be interesting to look at the highest tax bracket – who is in it and how the lower bound for being “rich” has changed over the years.  The table below is the result.  As you can see, in constant dollar terms the “richest” were much richer in the ‘50s. 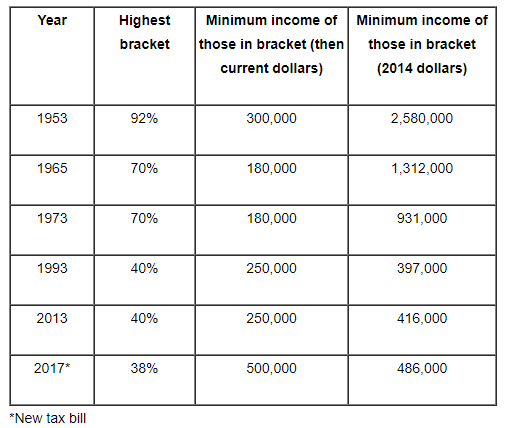 Editor’s note: This blog was originally published by the Community & Regional Resilience Institute (CARRI) and has been reposted with permission from the author. To learn more about CARRI, visit www.resilientus.org