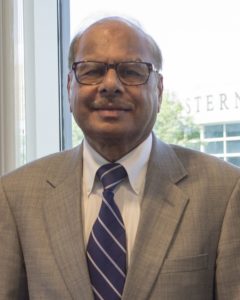 The Global Resilience Institute is delighted to announce that Dr. Vilas Mujumdar, GRI Distinguished Senior Fellow, has been awarded the 2019 World Federation of Engineering Organizations (WFEO) Medal of Engineering Excellence. Founded in 1968, WFEO is the international organization for engineers, bringing together 30 million professionals from approximately 100 nations. This award is one of two granted biennially by the Federation, and the recipient is chosen based on contributions to the practice of engineering, experience in the field, educational accomplishments, and international standing. Since September of 1989, there have been 14 esteemed recipients of the Medal of Engineering Excellence. Dr. Mujumdar is in the company of past awardees Ifedayo Akintunde (former President of the Nigerian Society of Engineers and CEO of Profen Consultants), Professor Lo Youmei (Vice Minister of the Ministry of Energy of China who led the construction of the world’s largest water conservancy and hydropower Three Gorges Project), and Professor Ching Chuen Chan (one of the foremost international authorities on electric vehicles).

Dr. Mujumdar has been a Distinguished Senior Fellow at GRI since 2017, working closely with the team on projects such as the 2019 Hubert H. Humphrey Fellowship Program and the National Science Foundation’s AccelNet proposal. Since 2009, Dr. Mujumdar has been an independent consulting engineer, and was previously CEO, President, and Partner at many large engineering firms. He also has experience working at the highest level of the public sector, including as Chief of Operations in the Division of State Architect for the State of California, and Director of the National Science Foundation’s Engineering Research Centers Program. Dr. Mujumdar is a recipient of many other awards and recognitions nationally and internationally including: Kenneth Roe award (2016) from American Association of Engineering Societies for Integrating various disciplines,  NSF- Director’s Award (2009); NSF Outstanding Service Award (2008); NEES Community Visionary award (2005); Special recognition from California Governor “for making a significant contribution to enhancing seismic safety in California”(1999); and many international awards for Building Projects in the private industry, with many projects published as feature articles in Engineering News Record. Dr. Mujumdar served on the ASCE Board of Direction and has served on the Board of many other professional societies. He is recognized internationally for his leadership and contribution to integrated trans-disciplinary work in reducing natural hazard risks and is proactively involved in addressing resilience and sustainability issues facing the global society. Dr. Mujumdar has authored two books, guidelines, numerous reports and manuals and over 80 technical papers and has given over 30 keynote lectures at international conferences.

The 2019 WFEO Award Ceremony will take place at the Gala Dinner, held during the World Engineers Convention and General Assembly on November 23, 2019 in Melbourne, Australia.