On May 4, 2021, GRI Distinguished Corporate Fellow and Vice President for J. S. Held’s Insurance, Richard Donohoe, led an online panel discussion on Perú’s Response to COVID-19. Over the last year, Richard has been leading healthcare and disaster response efforts in the country, including reconstructing hospitals after the 2017 El Nino Phenomenon, adding 5,000 beds for temporary COVID-19 hospitals in 9 districts, and developing a national oxygen strategy. He is working in conjunction with USSOUTHCOM, West Virginia National Guard, and Peru government entities such as INDECI (Disaster Response), UN refugee program, Feed the World and USAID.

Richard began the discussion by presenting a background on Peru’s demographics, political scenario and current infrastructure challenges – as one of the most capital-centric countries in the world, one third of the Peruvian population lives in Lima. It is also a very large country, with the Amazon region – more specifically the Laredo district, being larger than Germany. However, there is disconnect between rural communities and big cities – as most hospitals, care beds, and access to oxygen are in Lima, which leaves rural and indigenous communities with precarious health systems.

As other parts in Latin America, rampant corruption has created an ongoing period of political instability and ineffective management across sectors, including healthcare. As government officials quit or resign due to corruption scandals, the Contraloría General has also become overzealous, creating a fear of contracting among vendors and medical suppliers. The Contraloría General, Richard explains, is the responsible government agency for overseeing proper procedures in public administration and combating corruption – but due several cases of bribery, logistics and management procedures have become more meticulous leading to the stagnation of healthcare projects. This has posed major barriers to providing quality services, especially in health facility construction, equipment and supply purchasing and pharmaceutical distribution ­­– more specifically, Peru had 39% staffing level in healthcare and 29 unfinished hospitals pre-covid, Richard explains. “This created the perfect storm when Covid arrived in March 2020,” he says. Even throughout the pandemic, the mismanagement of resources continued – despite several government officials saying they would be the last getting vaccinated, turns out they were vaccinated in October last year well before the so-called “courtesy doses” of China’s Sinopharm vaccine was widely available in the country. “Meanwhile, over 400 frontline doctors have died,” Richard says. 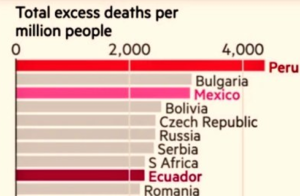 Peru is at the top of the list of countries in the world for excess deaths – and more than 47,000 people in Peru have died from COVID-19 as of March 2021. Excess deaths are a good indicator of how a disease is impacting a population as it represent deaths during a time period that are above what is expected under normal conditions. These deaths, Richard explains, can be attributed to the lack of healthcare infrastructure, including both personnel and oxygen supply, coupled with financial mismanagement. “People lost confidence in the health ministry due to the multiple deaths through the lack of oxygen,” he says. As in so many other areas, the uneven provision of oxygen and lack of transport infrastructure available to cope with a surge in oxygen demand exacerbated the inequality of healthcare systems across the country. As a highly centralized country, rural regions are thus worst-hit by the lack of medical supplies and construction of new health centers. “Parobamba,– a predominantly indigenous district–, for example, has waited for their hospital for 8 years,” Richard says. Besides infrastructure challenges, in Peru, around three out of every four workers are working informally, and many people live in harsh conditions without access to basic services and formal housing. Continued traveling via public transport and work in close proximity has made social distancing difficult. “It causes COVID to spread because they’re faced with a choice of starvation or working,” Richard says. Besides the high informality, there is an ongoing Venezuelan migration – who are often provided with little humanitarian assistance– which is causing a greater impact on an already precarious system.

Richard also highlighted the fact that Peru’s government has failed to properly adapt to the world of medical equipment processes and opted to over rely on international donations. “The whole world has moved to a cash basis,” he explains, “if you want to buy ventilators or oxygen equipment, you’re competing with France, Sweden and now India who are willing to put down cash to buy whatever they can get.” The historical corruption and the Contraloria tracking every expenditure, has also made it difficult for government officials to rapidly buy emergency equipment. On top of that, the 2017 El Niño phenomenon, a large scale flood affecting an area larger than the state of California has created a greater emergency. COVID-19 becomes an additional health burden in El Niño-sensitive countries – it has affected 13 regions, 940 medical facilities, 1600 education intuitions and took out 300 km of destroyed road and over 200 bridges, Richard says. “So as we’re talking about reconstructing hospitals with no bridges, it creates a challenge.”

The Peruvian government established and entity called “The Authority for Reconstruction with Changes (ARCC)”, to implement a comprehensive plan to rebuild public infrastructure. As part of this initiative, Peru and the UK signed a Government-to-Government (G2G) agreement in June last year to provide international expertise in major prevention programs and to rebuild infrastructure affected by the El Niño phenomenon. Since COVID hit right after, “It was sort of all hands on deck. Anybody that can help,” Richard says. “So a lot of us have been volunteering since.” Against the backdrop of COVID and continued flooding, there are some things working well – for instance, during this time, a contingency hospital was built in Pomabamba province, which will benefit more than 80 thousand citizens. “The fact that get a hospital out in in the span of five months is actually phenomenal for Peru,” Richard says.

Despite the ARCC efforts, given the unpredictability of ministers to make decisions, as well as the slowness of processes that cripple decision-making, Richard still predicts an unstable future for the country. He thus ended the panel highlighting the importance of combating corruption, “what we’re seeing here is really the true cost of corruption,” he says. “They’re just not equipped to respond to a disaster because they’re still trying to respond from the corruption.” Yet,  as the country is set to hold presidential elections in June 2021, perhaps a change in government could help alleviate or provide a new outlook to a country routinely rocked by political instability.