On September 22, 2021, GRI Faculty Affiliate, Dr. Sara Jensen Carr, gave a presentation on her new book, The Topography of Wellness: How Health and Disease Formed the American Landscape. Dr. Carr is a trained architect whose is currently an Assistant Professor in the College of Arts, Media and Design at Northeastern University. Her research focuses on connecting landscape, health, urban ecology, and architectural design. This research has informed her latest book, which examines the landscape responses to six past urban epidemics, and the lessons learned from these responses for current and future practice.

Considering the ongoing COVID-19 pandemic, Dr. Carr’s book launch and subsequent presentation with GRRN could not be more timely. Dr. Carr began her presentation with a question that inspired both the discussion and her general research: “How does the design of buildings, landscapes, and the public realm heal or harm us?” Dr. Carr explained that the foundation for that question came from her experience living in New Orleans in the wake of Hurricane Katrina. In the aftermath of one of the region’s most damaging natural disasters, Dr. Carr became part of conversations on how the city was going to recover and build back “greener and healthier.” These kinds of initiatives really got her thinking about health on an urban scale.

Recognizing the power of looking to the past to inform the future, Dr. Carr went on to present The Topography of Wellness: How Health and Disease Formed the American Landscape, which examines how the history of American epidemics has brought us to the current landscape we see today. Furthermore, Dr. Carr stated that these examinations are powerful when we apply them to the present, which is “a real inflection point in time when we think about design and health.” She pointed out the change in perceptions around health and urban planning, comparing past literature focusing on the “sick city” to recent literature focusing on the “happy” or “healthy” city. Why did this conception of cities change?

Dr. Carr continued the discussion by presenting three specific eras during which you can see significant changes in design in response to health phenomena. In these eras, she identifies three different health concerns that affected the built environment: (1) Miasma, (2) Germs, and (3) Behavior. Miasma Theory, Dr. Carr explained, associated foul air and water to airborne disease. This theory served as the foundation for the building of sanitary infrastructure in crowded, dirty, post-Industrial Revolution cities. Further implementations included street cleaning, replacing cobblestones with smooth pavement (as they believed the space in between the stones harbored harmful vapors), and looking to European city designs to respond to the fear of airborne disease. The search for fresh air also led to increased design of urban parks, as well as population shifts to more open cities, such as Denver, Colorado.

The next era discussed by Dr. Carr was concerned with germs. The introduction of vaccines revealed that illness could be cured by medicine. Therefore, Dr. Carr explained that architects began to focus less on addressing population density and more on how design could optimize bodies and health. Urban centers as the sites for disease became a central issue for urban planners. An initiative called “urban renewal” was implemented, with the aim of cleaning up cities. However, Dr. Carr explained that these efforts toward “renewal” were often instead used as ways to displace and erase minority and disadvantaged populations.

Finally, Dr. Carr talked about the most recent era, which is characterized by design geared toward changing behavior. She explained that one of the major health considerations during this period was obesity, largely caused by a sedentary lifestyle and car-centric design of suburban areas. Thus came the development of New Urbanism, an urban planning approach that focuses on the return of walkability, access to public spaces, and human-scaled urban design.

Dr. Carr ended her presentation with some thoughts on the current global pandemic, and how it may affect our built environment in the coming years. As the spread of COVID-19 is undoubtedly a major health issue that has caused significant behavioral change, Dr. Carr encouraged us to think about perspectives and trends that have emerged, and may still emerge as the pandemic continues. She particularly discussed how all urban design in response to health trends have negatively affected minority populations and historically disadvantaged communities. She explained that health has often been used as “a lever for policies of exclusion, and even segregation,” and encouraged us to use historical lessons to think about how we can shape a healthier future. 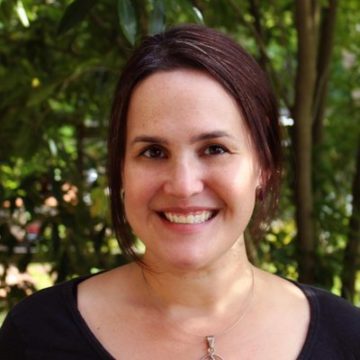 Sara Jensen Carr’s teaching and research focuses on the connections between landscape, human health, urban ecology, and design. Her current book in progress, The Topography of Wellness: Health and the American Urban Landscape, examines landscape responses to six historical urban epidemics and the implication for current and future practice.

Sara holds a Master of Architecture from Tulane University, and a Master of Landscape Architecture and PhD in Environmental Planning from University of California Berkeley, where she was the co-founding editor of the ASLA Award-winning GROUND UP Journal. She is a licensed architect who has worked professionally in New Orleans and the San Francisco Bay Area. Her research and representational work has been exhibited at San Francisco Planning and Urban Research (SPUR) gallery, the National Building Museum in Washington D.C., and the San Francisco Museum of Modern Art. In 2017, she held a residential Mellon Fellowship in Urban Landscape Studies at Dumbarton Oaks.

Prior to arriving at Northeastern, she held a joint appointment in the School of Architecture and Office of Public Health Studies at University of Hawai’i at Manoa, where she worked with several local nonprofits and agencies on evaluation and design initiatives, including the Hawai’i Department of Health, the Native Hawaiian Health Program at Queens Medical Center, and the Outrigger Duke Kahanamoku Foundation. She is also an advisory board member at Design 4 Active Sacramento, a cross-sector, award-winning team that advocates for and advises on active design initiatives.