Natural and man-made disasters each come with their own set of challenges, and can result in cascading impacts due to the interconnected nature of our world. Unlike natural disasters such as tornadoes or hurricanes, some man-made disasters can be prevented, if necessary steps are taken. One of the major man-made challenges that we face in today’s world is cybercrime.

The Internet is sometimes called a “Web of Profit” for hackers, as they can make a lot of money perpetrating powerful and silent cyber-attacks. These attacks can have far-reaching consequences. According to reports in June 2018, of the 7.6 billion people in the world, 4.2 billion (55.1%) use the internet. Along with the ability to interact with the world and access the vast knowledge available, it has also streamlined our homes, cars and lives with Internet of Things (IOT) devices. This proliferation of the internet is also leveraged by criminals to make money, causing harm to companies and the government. According to a Kaspersky Security Bulletin, attacks on businesses increased threefold in the first nine months of 2016, “the difference between an attack every 2 minutes and one every 40 seconds.”

Reports from the FBI clearly show an increase in loss to the U.S. economy every year due to cybercrimes. 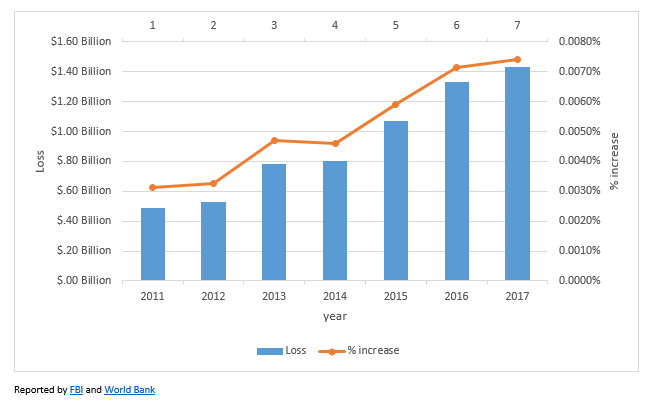 In 2011 the FBI reported loss due to cybercrime of approximately $0.50 billion, which jumped to $1.45 billion in 2017 — and there are no signs of this trend slowing down. Every day companies are at risk of being hit with a cyberattack. The FBI data also only quantifies the reported issues. Some companies do not report their data breaches or any details about how much was lost or if the hacker was paid. Only an estimated 10% of cybercrimes are reported, with most attacks affecting small companies who either do not detect or report them to authorities.

Cyberattack victims face both short and long term losses. The short-term losses includes the money paid in ransom and the loss of computing, while the long-term losses include harm done to the company’s reputation and the potential loss of customers stemming from that harm. Reports say that 85% of businesses are ready to defend against cyberattacks and only 61% businesses have a plan to recover from an attack. Because of the vast number of potential attacks and the need for a business to recover quickly, an organizational resilience plan is necessary to ensure continuity after an incident.

There are many motives for cyberattacks. These can include personal vengeance, business rivalry, or espionage. Some hackers even sell their skills as Cybercrime-as-a-Service and are paid by those who do not possess the technical skills themselves or want deniability. Some hackers steal data from different servers and sell it on the open market. This data is usually from a breach of customer information which can include credit card and social security numbers (SSN), contact information and e-mail addresses. According to one report, personally identifiable information including SSNs sell for $3 each on the black market. Combining SSNs with a credit card and selling that information as a package can net a hacker even more money. This information can be used to obtain more information in regards to the stolen identity. For example, a hacker can call their victim(s) and claim that they are from a trusted organization, armed with personal information and details.

These types of attacks are rising day by day and there must be plans in place to stop and recover from them. The first thing to tackle is how to prevent a cyberattack. One step in the right direction is the government making laws that the device manufacturers have to follow so that their devices are as secure as possible when released to the market. Recently, the United Kingdom (UK) set up a new standard for manufacturers. The big tech giants had to sign up a new code of conduct and retailers were advised not to stock products that did not meet the requirements. The government also has to make sure every organization has a certain level of security. No matter how big or small the industry is, it should have a cyber security process in place. Incidents in the past are clear evidence that hackers can attack a big company through small companies that are related. On such example was attack on Target in 2013 due to an exploited vulnerability in its HVAC provider Fazio.

No matter how good the security is, there are no “silver bullet” solutions. As a result, everyone connected to the internet must have a good plan for recovery. The Department of Homeland Security (DHS) with US-CERT has created an assessment framework known as Cyber Resilience Review (CRR) to check how ready an organization is to defend against an attack. This is a voluntary process but the government could look into making assessments like these mandatory and public, so that every organization can see if it is ready to withstand an attack, especially as it is claimed that 60% of small businesses targeted by an attack go out of business after the attack.

Another potential option to increase security is monitoring by the government, cyber security firms and other national organizations of cyber activity/attacks. Many governments have set up voluntary programs to keep an eye on the network traffic to detect malware. One such program is Anti-Bot Code of Conduct (ABC); a voluntary agreement between the U.S. Federal Communications Commission (FCC) and Internet Service Providers (ISPs) to detect bots on the ISPs networks. The U.S. government introduced this policy in 2012 but still there are only a hand full of ISPs who have implemented it, due to costs. The government has kept this voluntary because of privacy issues, as many customers do not want their network traffic to be tracked.

The cost of cybercrime is estimated to jump to $1.5 trillion at the end of 2018 worldwide and rise to $6 trillion by 2021.  Cybercriminals can attack any IT sector system from virtually any location, take the money and run. Cybercriminals can be very difficult to trace and some are never identified. It is therefore critical to have plans in place on how to recover from an attack and quickly resume operations. The biggest question is:  Who could help? Aside from cyber security firms, an important piece of the solution are the everyday internet uses themselves. We should always be aware what we do on the internet, and report any malicious activity, so that organizations can know about and prepare for future attacks.