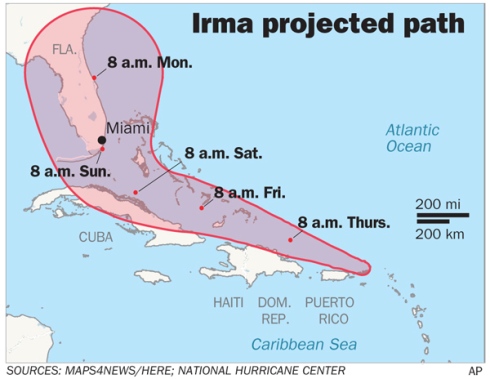 On Monday night, hurricane warnings were in effect as the Category 5 storm moved towards islands including Antigua and Barbuda, Saint Maarten, Puerto Rico, and the U.S. Virgin Islands. The governor of the British Virgin Islands urged residents of Anegada island to evacuate, and schools and government offices were closed across the Caribbean.

On Tuesday night, Irma made impact with the northern Leeward Islands in the Caribbean. A weather station on the island of Barbuda measured wind gusts of 155 mph before the station lost function, and storm surge measured up to 8 feet. Irma’s maximum of 185 mph winds break records for Atlantic hurricanes that have made landfall, and the storm’s pressure continues to drop – a bad sign for Florida – as lower pressure yields a stronger storm. Irma’s power is unlikely to fall below that of a Category 4 as it continues west toward the Florida coast, with an expected Sunday arrival.

The hurricane passed over Barbuda early Wednesday, leaving major destruction in its wake. Antigua and Barbuda Prime Minister Gaston Browne told the Associated Press that approximately 60% of its residents were left homeless. The storm remained a Category 5 by Thursday morning with winds of 180 mph, according to the U.S. National Hurricane Center.

Irma now has the potential to hit the Florida coast, inducing evacuations and a state of emergency. Miami-Dade County began evacuations Wednesday morning for special needs residents, such as people requiring ventilation support who require electricity for daily healthcare treatment. The Mayor of Miami-Dade County, Carlos Gimenez, said area residents seem to be heeding the advice of emergency officials, evacuating as necessary, which he believes is largely due to the destruction wreaked by Hurricane Harvey just last week.

Islands like Puerto Rico, however, face a unique set of challenges. Evacuation is geographically limited, and the island’s power grid has more than a few weak links. Utility company employees have left their jobs to move to the U.S. mainland as a result of the island’s economic downturn, creating a shortage of workers in a network that Puerto Ricans depend on. By Wednesday night, over half of the island’s residents were without power, according to Puerto Rico’s emergency management agency.

As of Tuesday September 5, FEMA had deployed approximately 124 staff members to the U.S. Virgin Islands and Puerto Rico, and 83 additional staff members were serving in Puerto Rico’s FEMA call center.

“Now is the time for everyone in the U.S. Atlantic territories, and those living along the U.S. gulf and east coasts to prepare for this potentially catastrophic storm,” the agency stated in a press release issued Tuesday. “There is a growing chance of seeing impacts from Irma in parts of Florida later this week.”