Hurricane Florence is forecast to hit the U.S. East Coast between Thursday night and Friday morning, the sixth named storm and the first major hurricane of the 2018 Atlantic season. According to National Hurricane Center forecasts, Florence will be a “very powerful major hurricane” on its approach to the southeastern U.S.

By this time last year nine named storms had already formed, including Harvey and Irma, two of the most powerful and destructive of the season. They would be followed by eight others, including category five Hurricane Maria, the costliest hurricane on record to strike Puerto Rico and the U.S Virgin Islands. Together, Harvey, Irma and Maria are among the top five costliest storms in United States history.

All-in-all, the 2017 storm season ranks as the most costly in the nation’s history.

With weather events becoming more severe and more frequent, we are beginning to see a shift from investing in recovery, to ‘building in’ resilience. There is already a change underway at the Federal Emergency Management Association (FEMA), where officials have launched a new resilience organization, released an updated strategic plan with several shifts in federal disaster relief policy, and are working to ensure greater investment in mitigation strategies before and after disruptive events.

In summary, FEMA’s 2018 Strategic Plan calls on the nation to build a culture of preparedness and better ready the nation for catastrophic disasters. This includes investing in pre-disaster mitigation and planning for a post-disaster recovery focused on rebuilding smarter.

“We need to stop acting as though disasters are rare and unknowable events,” stresses Global Resilience Institute (GRI) Founding Director Dr. Stephen Flynn in a recently authored commentary. “More of us are living in urban regions that are vulnerable to effects of climate change. Rising sea-levels, extended heat waves and droughts, rain deluge and coastal storm surge portend a future marked by extreme weather events that are more frequent and destructive…There is much we can and should be doing to mitigate the destruction that disasters reap. Communities, companies, and countries need to focus on building resilience as a way to not just survive, but to thrive in the face of a future promising plenty of turbulence.”

Since 2013, Dr. Flynn has led teams in conducting post-disaster infrastructure resilience assessments, initially with support from the Alfred P. Sloan Foundation, and then from the U.S. Department of Homeland Security. These have included Superstorm Sandy (2013), Boston’s “Snowmaggedon” (2015), South Carolina Hurricane Joaquin Flooding (2015), Fort McMurray and Great Smoky Wildfires (2016), and Hurricane Harvey in Houston (2017). 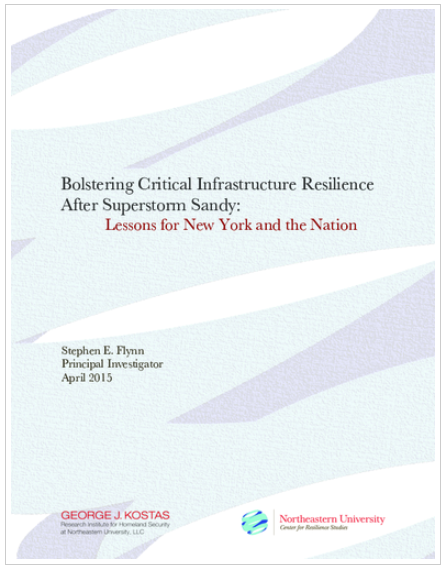 In the Superstorm Sandy report, Dr. Flynn identifies lessons learned in the wake of the disaster, and how to use those lessons to advance critical infrastructure resilience throughout communities nationwide. It identifies four major obstacles to the resilience of these systems in the New York metropolitan region, including outdated codes and inadequate management frameworks, as well as four recommendations for overcoming these challenges, including implementing economic incentives for the adoption of resilience-boosting strategies and increasing the federal capacity to collaborate with regional actors. CLICK HERE to read the full report. 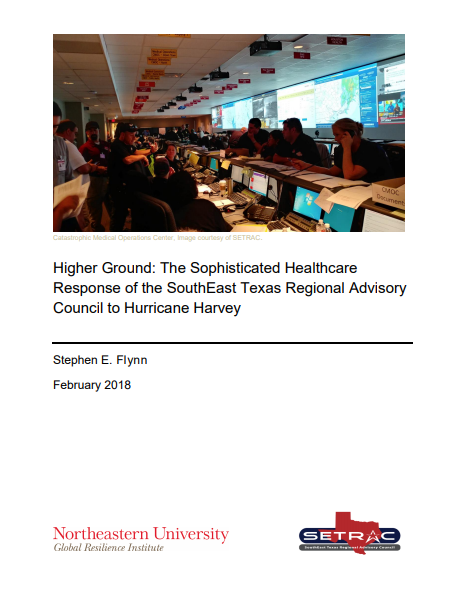 More recently, the Hurricane Harvey report, produced in collaboration with the SouthEast Texas Regional Advisory Council (SETRAC), highlights the critical importance of saving lives by having in place effective regional healthcare response coalitions in support of the response to and recovery from major disasters. It analyzes the efforts of SETRAC before, during, and after Hurricane Harvey’s landfall and it briefly explores similar healthcare coalitions across the country to provide further case examples of the importance of having robust regional coalitions in place. CLICK HERE to read the full report.

Core to the mission of the Global Resilience Institute is to help advance preparedness at multiple levels to effectively respond to both slowly emerging disruptions and sudden disasters, human-made and naturally-occurring. It accomplishes this objective by facilitating new interdisciplinary research collaborations; working in close partnership with industry, government, communities, and nongovernmental organizations; and engaging in external outreach to inform and empower bottom-up efforts that contribute to individual and collective resilience. Learn more: globalresilience.northeastern.edu