The 2017 Atlantic hurricane season has the potential to be “extremely active,” and could be the most active season seen since 2010, the National Oceanic and Atmospheric Administration (NOAA) announced on Wednesday.

The updated 2017 hurricane season outlook predicts a 60% chance of an above-normal season, after forecasters increased the anticipated number of major hurricanes and named storms.

“The wind and air patterns in the area of the tropical Atlantic and Caribbean where many storms develop are very conducive to an above-normal season,” added Bell. “This is in part because the chance of an El Nino forming, which tends to prevent storms from strengthening, has dropped significantly from May.”

An Atlantic hurricane season runs from June 1-November 30. The first nine weeks of this year’s season saw six named storms, half the average number typically seen during the six month period. According to Bell, some of the factors which indicate an above-normal season in the weeks ahead include warmer tropical Atlantic waters and higher predicted activity from available models.

“The season has the potential to be extremely active,
and could be the most active since 2010.” -NOAA 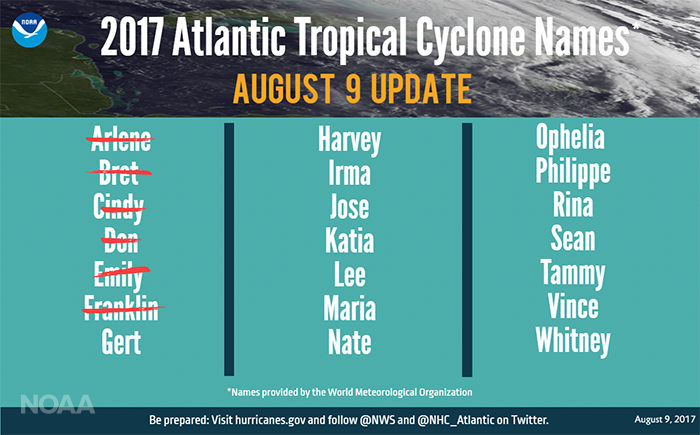 NOAA released its scheduled hurricane season outlook on Wednesday — noting that the numbers include the season activity to date. Cindy and Emily, two of the six named storms that formed in the Atlantic basin so far this season, struck the United States, making landfall on June 22 and July 31, respectively.

“Today’s updated outlook underscores the need for everyone to know their true vulnerabilities to storms and storm surge,” said FEMA Administrator Brock Long. “As we enter the height of hurricane season, it’s important for everyone to know who issues evacuation orders in their community, heed the warnings, update their insurance and have a preparedness plan.”

For tips on creating a preparedness plan, CLICK HERE