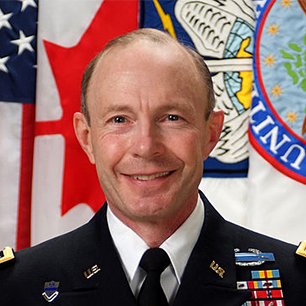 General Charles “Chuck” H. Jacoby, Jr. serves as Partner and senior Vice Chairman with Capitol Peak Asset Management and is on the Advisory Board of Thermal Energy partners. General Jacoby brings over 36 years of experience leading military, government and international organizations. Prior to retiring from the United States Army, he was the first Army officer to command North American Aerospace Defense Command (NORAD) and the United States Northern Command, where he led the 1,800-person bi-¬national and joint headquarters and integrated 35 federal, state and non-governmental organizations for the defense and security of North America.

General Jacoby has commanded at all levels in joint and Army assignments, from parachute rifle company to geographic combatant command, including combat operations in Grenada with the 82nd Airborne Division; Operation Enduring Freedom, Afghanistan; and Operation Iraqi Freedom, Iraq. He also served as an assistant professor in the Department of History at the United States Military Academy at West Point. As the deputy commander of Combined/Joint Task Force-76 from 2004 to 2005, he was responsible for the conduct combat operations in Afghanistan. As the commander of Multi-National Corps-Iraq from 2009 to 2010, he commanded the 135,000 troops conducting combat operations across Iraq. General Jacoby served as the director for Strategic Plans and Policy for the Joint Staff, where he led planning for coalition and NATO operations in Libya, assisted in the Middle East peace process and served as the U.S. military representative to the United Nations.

His military decorations include awards from the governments of Canada, Mexico, Honduras, Guatemala and Colombia. An avid writer and historian, he has penned scholarly monographs on the efficacy of air campaigns, the organization of modern brigade combat teams, and articles on strategic deterrence, civil-military relations and institutional agility and risk. General Jacoby has been involved with several organizations, including the Council on Foreign Relations, and the Association of the United States Army. He serves as a Trustee for the El Pomar Foundation and the Korbel School of International Relations at Denver University. He is also the distinguished chair of the Modern War Institute at the United States Military Academy, is a member of the Defense Science Board Task Force on Homeland Defense.

General Jacoby holds a B.S. from the United States Military Academy, an M.A. in history from the University of Michigan, an M.S. in military arts and science from the School of Advanced Military Studies at Fort Leavenworth, Kansas and an M.A. in strategic studies from the National War College at Fort McNair, Washington, DC.