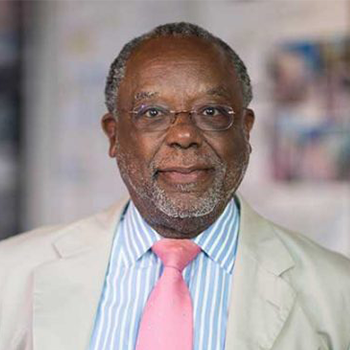 Ted Landsmark is distinguished professor and director of the Kitty and Michael Dukakis Center for Urban and Regional Policy in the School of Public Policy and Urban Affairs in the College of Social Sciences and Humanities at Northeastern University. He holds a Ph.D. in American and New England studies from Boston University, and professional degrees in law, and environmental design from Yale University.

As Mayor Martin J. Walsh’s first appointment to the Boston Planning and Development Agency’s Board of Directors, he has brought to the board a wealth of expertise in architecture, urban design, civic leadership, architectural and construction law, and community advocacy. During his seventeen-year tenure as president and CEO of the Boston Architectural College, Dr. Landsmark led the growth of the school from a center into an internationally recognized, multi-disciplinary institution. In August 2014, he was named president emeritus of the college. Landsmark has served as academic vice president of the American College of the Building Arts in Charleston, South Carolina, and as a faculty member and administrator at the Massachusetts College of Art, the Massachusetts Institute of Technology, Harvard University, and UMass Boston. He has also served as a trustee or board member for many non-profit organizations, including: the Boston Museum of Fine Arts, American Architectural Foundation, the Design Futures Council, The Boston Society of Architects, Historic New England, and Historic Boston. He was also president of the National Architectural Accrediting Board, and the Association of the Collegiate School of Architects.