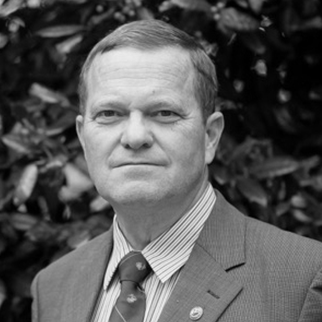 Major General Mike Lehnert, USMC (retired) graduated from Central Michigan University in 1973 and was commissioned as a second lieutenant in the United States Marine Corps as a combat engineer. He served on active duty for thirty-seven years and retired as a Major General in 2010. He deployed to Japan, the Republic of the Philippines, Cuba and participated in combat operations in Panama, Kuwait and Iraq. In 2003, he led 5,000 Marines and Sailors during the initial invasion of Iraq.

He held thirteen separate commands from platoon commander to Joint Task Force Commander. His service included: Chief of Staff Joint Task Force Panama overseeing the turnover of the Panama Canal, Joint Task Group Commander in Guantanamo Bay Cuba during the Cuban migrant crisis; Commander, Joint Task Force 160 to establish detention facilities for Al Qaida and Taliban terrorists, and Marine Logistics Group Commander during Operation Iraqi Freedom. His last job on active duty was as the Commanding General of Marine Corps installations west of the Mississippi. During that time he was recognized for his work recovering endangered species on the Marine Corps bases under his command. He also participated in an initiative to get more veterans into universities. This effort grew into the Student Veterans of America. In five years the SVA grew from twenty veteran-led chapters in universities across the country to over 1,000 chapters in every state and in three countries.

After retiring from the Marine Corps, he served for two years as the senior advisor to the Commissioner for Customs and Border Protection in Washington, D.C. His passions are the environment and education. He serves on the board of the Endangered Species Coalition and as the Vice Chairman of the board for the Student Veterans of America. He lectures at universities across the country as a Woodrow Wilson Visiting Fellow on leadership, ethical decision making and the environment.