This Global Resilience Institute report analyzes the record-breaking snow storms that occurred in the Boston metro region between January 24 and February 22, 2015.

In that month, 94.4 inches of snow fell, with half falling in just 2 weeks as a result of Winter Storm Juno and Winter Storm Marcus. The storms severely damaged the city’s transportation infrastructure, including a system-wide shutdown of all train and bus operations. Over 1.3 million daily users of public transportation were impacted, 25% of whom lack a private vehicle as an alternative method of transportation. This cost an estimated $2 billion in economic damages due to lost productivity and revenues. 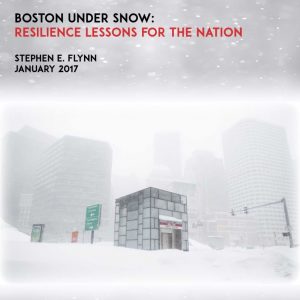 In 2016, the Global Resilience Institute began a project to study infrastructure and governance resilience lessons resulting from this snowfall with support from the U.S. Department of Homeland Security (DHS) Science and Technolog Directorate’s Resilient Systems Division and the DHS National Protection and Programs Directorate, Office of Infrastructure Protection. Boston Under Snow: Resilience Lessons for the Nation is the culmination of this project.

This report benefited from numerous interviews with affected citizens across multiple communities, relevant public and private sector officials, and engineers who studied the storms’ impact on the region’s critical infrastructure. It presents findings and recommendations for other metro regions dealing with similar risks, or similarly interdependent infrastructure systems. The full report can be accessed here: Boston Under Snow: Resilience Lessons for the Nation.