In October 2015, South Carolina experienced record breaking rainfall totals for nearly five straight days. As the rainfall intensified, many dams overtopped or washed out, sending torrents of more water downstream and triggering cascading effects throughout the region. The flooding destroyed homes, stores, agriculture, roads, water treatment facilities, and other interdependent critical infrastructure systems. All told, over 500 roads and bridges, 36 dams and 160,000 homes were damaged or destroyed and the state suffered hundreds of millions of dollars of damage. Most tragically, 19 lives were lost. 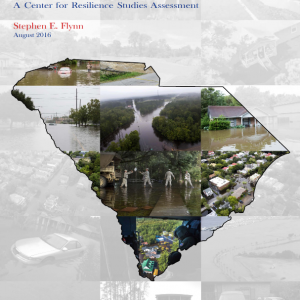 Following this disaster, with sponsorship from the U.S. Department of Homeland Security Science and Technology Directorate, Resilient Systems Division, and undertaken in coordination with the National Protection and Programs Directorate, Office of Infrastructure Protection, the Center for Resilience Studies sent a team to Columbia, South Carolina to study the cascading effects of the storm, the interdependent nature of critical infrastructure systems, and to harvest lessons that could be shared with similarly situated communities before their next major flood. The team spoke with citizen activists, response and recovery officials at multiple levels of government and local university researchers. After drafting an initial set of findings, the Center for Resilience Studies convened a workshop in June 2016 with this wide group of stakeholders to get further input and feedback. The final report is the result of these countless interviews and conversations, first-hand observations and in-depth research, and decades of collective scholarship on the nature of resilient communities, cities, regions and the critical infrastructure systems upon which they depend.

It can be accessed here: The South Carolina Deluge: Lessons learned from a Watershed Disaster