On Wednesday, January 22nd, GRI’s Founding Director, Stephen Flynn spoke at the Myra Kraft Open Classroom – Climate Change: A Course For Everyone to help promote climate change education, resilience, and action for all. The course, held weekly by Northeastern’s School of Public Policy, focuses on the basic science of climate change and it’s impacts on the natural world, built infrastructure, and humankind, as well as strategies to prevent the worst outcomes. Dr. Flynn was invited to focus on how extreme weather effects emergency preparedness and how we can implement strategies for climate resilience. GRI’s Distinguished Senior Fellow, Dr. Atyia Martin, also spoke at the event, followed by colleagues Brian Swett – Director of Cities and Sustainable Real Estate at Arup – and David Sittenfeld – Manager of Forums and National Collaborations at the Museum of Science.

To kick off the event, Dr. Flynn highlighted how the increasing hyperconnectivity of the world has benefited society, yet has also created a deep reliance and interdependence on global aid. He continued by noting the main barriers keeping our society from becoming resilient including, risk illiteracy, inadequate designs for systems building, pervasive economic disincentives, inadequate governance and policy guidance, and lack of adequate interdisciplinary training and education programs to foster resilience. He explained that in order to utilize our connections and work collectively to become climate resilient, we need “to build the solutions from the bottom up … in inclusive ways to tackle these challenges,” and that we already have the tools and strategies to implement them, but need greater investment. Dr. Flynn explained that there is $140 billion in unspent federal disaster assistance funds that we must leverage to expand our resilience systems and protect our communities. 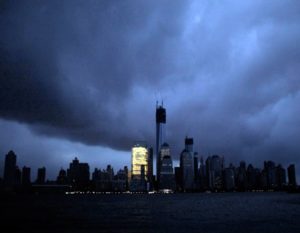 As an example of the effects of extreme weather, Dr. Flynn focused on Hurricane Sandy, which left much of the Northeast without power or transportation for days in October 2012. Many companies were lucky to have implemented resilient emergency systems to combat the effects of the storm and keep offices powered and dry from generators. But Dr. Flynn noted the small oversight that large institutions, such as Goldman Sachs, encounter: not applying a systematic resilience approach. Although the building was powered, no employees were able to commute due to lack of resilient transportation systems, or telecommute due to lack of power in residential areas. This shows that greater interdisciplinary communication and planning are needed to promote resilient systems.

At the end of the session, all of the speakers participated in a panel to answer the audience’s unanswered questions. One student asked for Dr. Flynn’s thoughts on institutions’, specifically Northeastern’s, responsibilities to create climate resilient infrastructures and advance climate justice in neighboring areas. He noted that there is often internal bureaucracy that slows the implementation of institutional initiatives and believes that there needs to be a greater urgency for institutions to become good neighbors in their communities. He added that “there is a specific effort that we are trying to advance which is building a microgrid based on solar, that involves our neighbors in Roxbury, makes advancements to the Boston Housing Authority, potentially by deploying solar panels on rooftops. Ideally what we would be doing would be training folks to actually do that job – the installations – providing jobs and support, and then Northeastern [would be] the anchor customer for the excess energy being produced.” So although much of the Climate Course discussed overwhelming affects of extreme weather and natural disasters, it was inspiring to hear about initiatives and strategies being implemented now and for the future that will help combat climate change.