The average summer temperature in Boston from 1981 to 2010 was 69 °F, by 2050 it may be as high as 76 °F and by 2100, as high as 84 °F. Heat waves across the US have been on the rise, creating hazardous environments for humans and animals, in addition to causing failure of power grids and transportation systems. Being the leading cause for weather-related deaths, heat waves are a pressing issue as global temperatures continue to escalate. To enhance community resilience to climate change and encourage public participation in citizen science, the Museum of Science, Boston launched its new project, funded by NOAA, called Citizen Science, Civics and Resilient Communities (CSCRC), this past summer. Partners include SciStarter, an online community dedicated to improving the citizen science experience for project managers and participants, Arizona State University, Northeastern University, and the National Informal Science Education Network. GRI faculty affiliate, Dr. Brian Helmuth, Professor of Marine and Environmental Sciences, along with David Sittenfeld, Manager of Forums and National Collaborations at Museum of Science and Ph.D. candidate, represented Northeastern in the project. 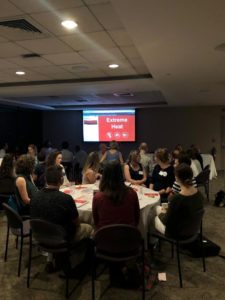 As part of the project, a pilot titled “Wicked Hot Boston” was launched and included over 50 volunteers investigating the urban heat island effect of 10 neighborhoods in Boston, Brookline, and Cambridge. They measured temperatures and humidity using heat sensors by driving around these areas. The routes were selected by city planners and data was collected in late July and early August in the morning, afternoon, and evening. CAPA Strategies, a data collection and community engagement company that aims to bridge the gap between citizen science and community engagement, used the data collected by citizens to create area-wide maps that modeled the absolute and real-feel temperatures across the urban landscape based on satellite data. The preliminary ‘real-feel’ temperatures were presented in the form of posters at the Museum of Science on September 24, 2019.

Followed by the poster session, participants took on the role of various stakeholders from a neighborhood that was vulnerable to extreme heat and discussed the tradeoffs of implementing a range of resilience planning strategies. After an hour-long discussion, the participants devised their own resilience plan for the neighborhood, and were then addressed by a Local Resilience Planner’s Panel on government efforts surrounding community resilience. The panel included John Bolduc, Environmental Planner for the City of Cambridge; Kara Brewton, Economic Development Director for the Town of Brookline; and Nancy Smith from the Boston Public Health Commission.

Similar events will be taking place at 28 science centers around the US over the next three years with the goal of connecting citizen science data to resilience planning for four extreme weather-events, namely extreme heat, extreme precipitation, drought, and sea level rise. Participants from around the country will collect data and review potential resilience strategies that communities can implement for mitigation and adaptation to climate change. Wicked Hot Boston was an effectiveattempt to provide a better understanding of health and social implications of extreme heat to Bostonians so that they can inform the decision of city planners and vocalize community priorities. The successful execution of this event has set a precedent that future citizen science projects can follow.