As part of our Global Resilience Research Network (GRRN) Resilience Lecture Series, this month, GRI distinguished senior fellow, Dr. Julia Byers, LMHC, ATR-BC, led an online panel discussion on the role of creative expression to enhance resilience and humanitarian work during uncertain times. For the past 40 years, Dr. Byers has been working in over 25 countries providing humanitarian aid through expressive art, play therapies and mental health counseling. She has worked with many communities who have experienced trauma as a response to natural disasters, violence or unexpected personal bereavement and loss.

Living in times of uncertainty whether caused by economic disruptions, environmental crises, or just plain human developmental transitions necessitates a multi-faceted approach to existential living. Dr. Byers argues that the use of creativity within a humanitarian relief perspective offers those in need a path to (re)gaining meaning and purpose.

Through the illustration of art samples drawn from trauma-informed human interventions with populations in the Middle East, Uganda, and the Philippines, as well as other associated personal encounters, Dr. Byers reviewed the 5 C’s of creativity—Connectedness, Creativity, Centering, Confidence and Cultivating Community—to demonstrate how integrating the arts can enhance efforts to establish resilient coping skills. “Resilience is not necessarily about bouncing back, it might be an adaptive sense of the new normal,” she said. “I’m not sure if we even do bounce back to where we were before.”

Below are some illustration samples Dr. Byers discussed in the panel: 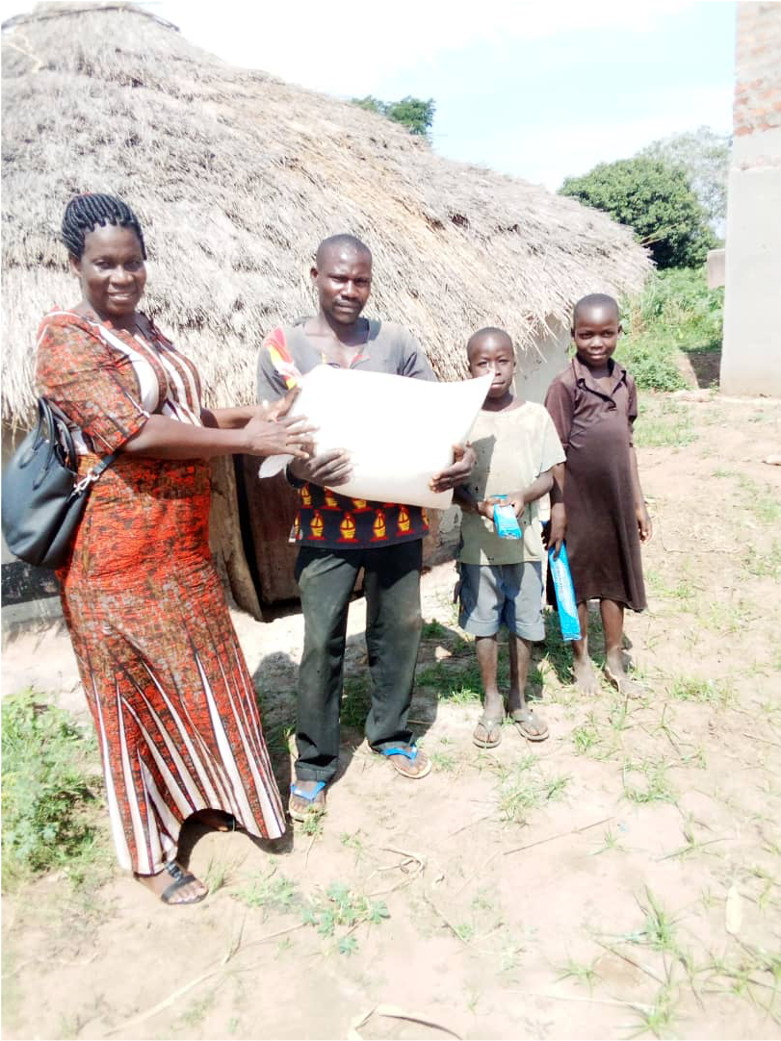 For the first “C”, Connectedness, Dr. Byers presented the picture of Emma Chang—a community leader she met during a 5-year project in Uganda following the devastation of the Lord’s Resistance Army (LRA). During this time, Dr. Byers, alongside Dr. Jody McBrien, worked with children who witnessed and survived the LRA war. Their book, “Cold Water: Women and Girls of Lira, Uganda,” presents the trauma, courage and triumph of the remarkable women of Lira whose stories of hope and resilience after the war demonstrate how communities can be rebuilt even where hope seems to be lost. 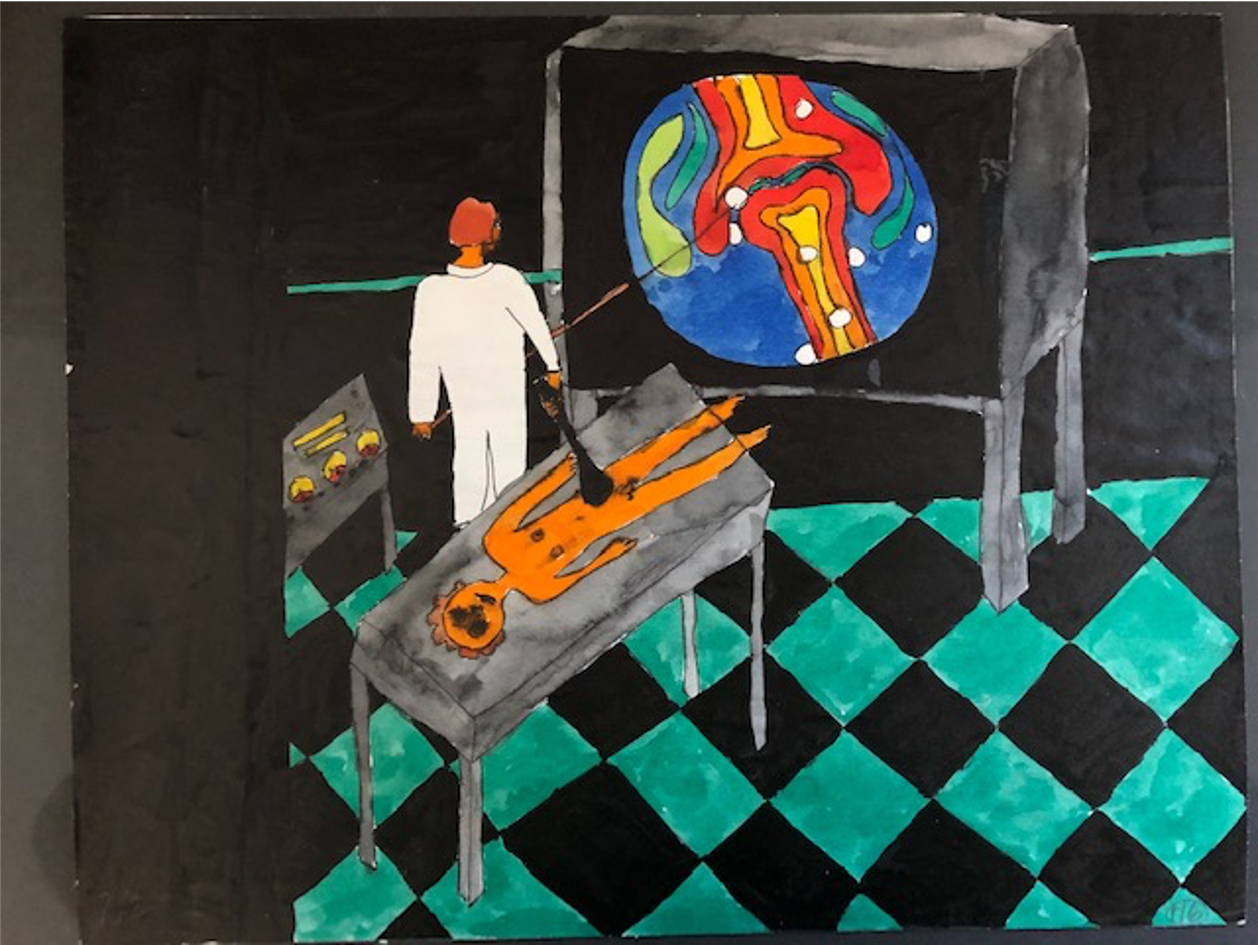 The second “C” is Creativity, “when people are hurt, it binds anxiety, but it gives you an ability to express emotions, hold ambiguity and paradoxes in the most amazing way,” she said. This piece was created by a 23-year-old man who died of AIDS. “The years building up to his sad death, he was able to express how he felt,” Dr. Byers said. “If you look in his image, he felt like he was under a magnifying glass that he himself was disjointed and disconnected.” However, the fact that he could express himself in the midst of everything he was going through spoke to the resilience of who he was—even though he died, he left a legacy of images, for his family and friends to hold onto. 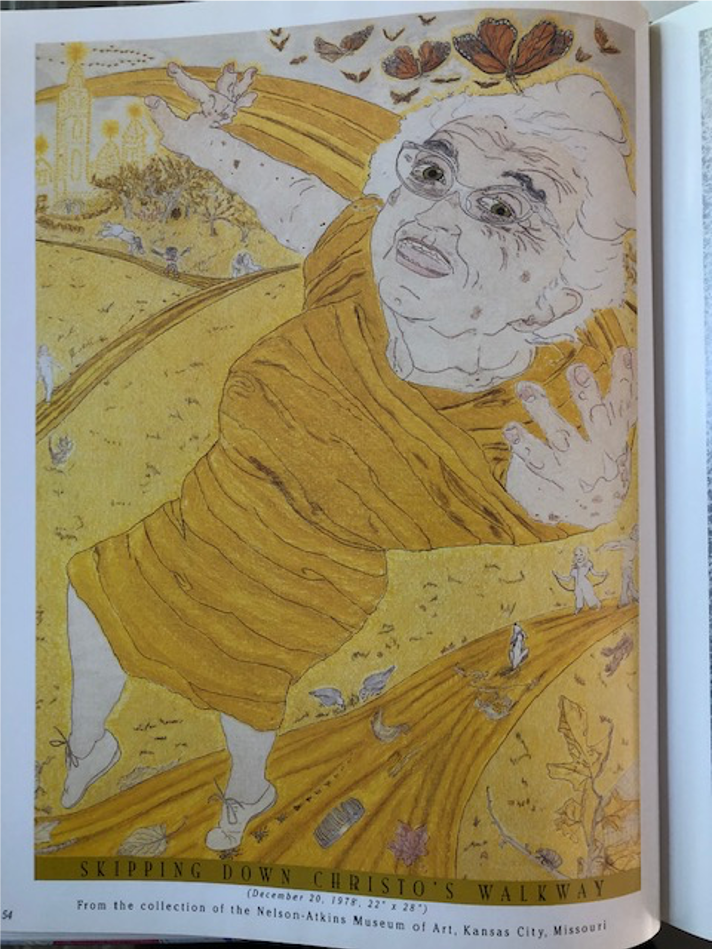 Another example of the critical role of art engagement—not for the sake of art, but for life itself—is the story of Grandma Layton, a woman who cured herself of 40 years of clinical depression by doing self-portrait contour drawings. Bob Ault, who was an art therapist in Kansas and co-founder of American Art Therapy Association, taught Grandma Layton the technique of “blind” contour drawing, in which the artist looks at the paper only for points of reference, focusing on the subject reflected in their mirror rather than the line being drawn on the paper. 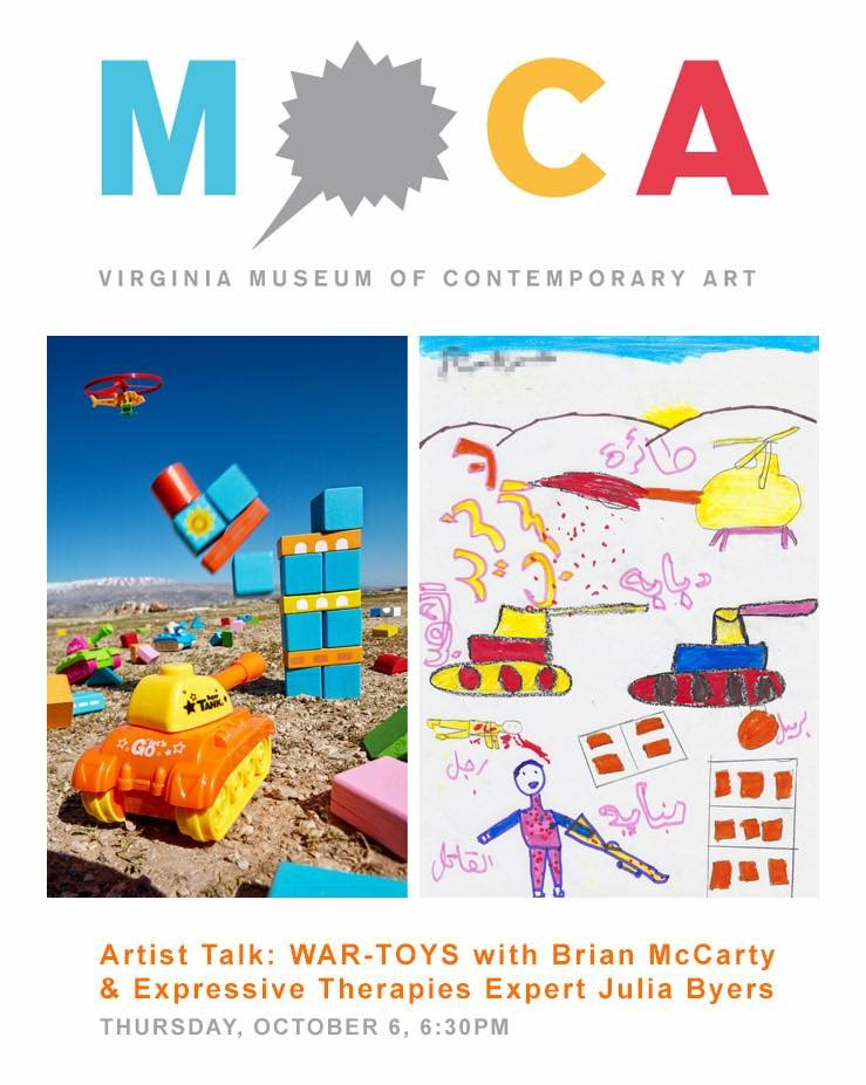 Dr. Byers also presented the work of photographer Brian McCarty, who has worked with children affected by war in Israel, Palestine, Jordan and Lebanon.  His book, “War-toys,” is a unique photo series that explores the perspectives of children living in war zones using principles of play and art therapy to safely gather children’s accounts of war. McCarty’s work, according to Dr. Byers, showcases the concept of Centering, which in psychology refers to an increase in attention and energy to provide relief from stress and anxiety. This photo series provides a powerful context for the children’s accounts and what they see every day while documenting the toys and playground available in a conflict-zone. 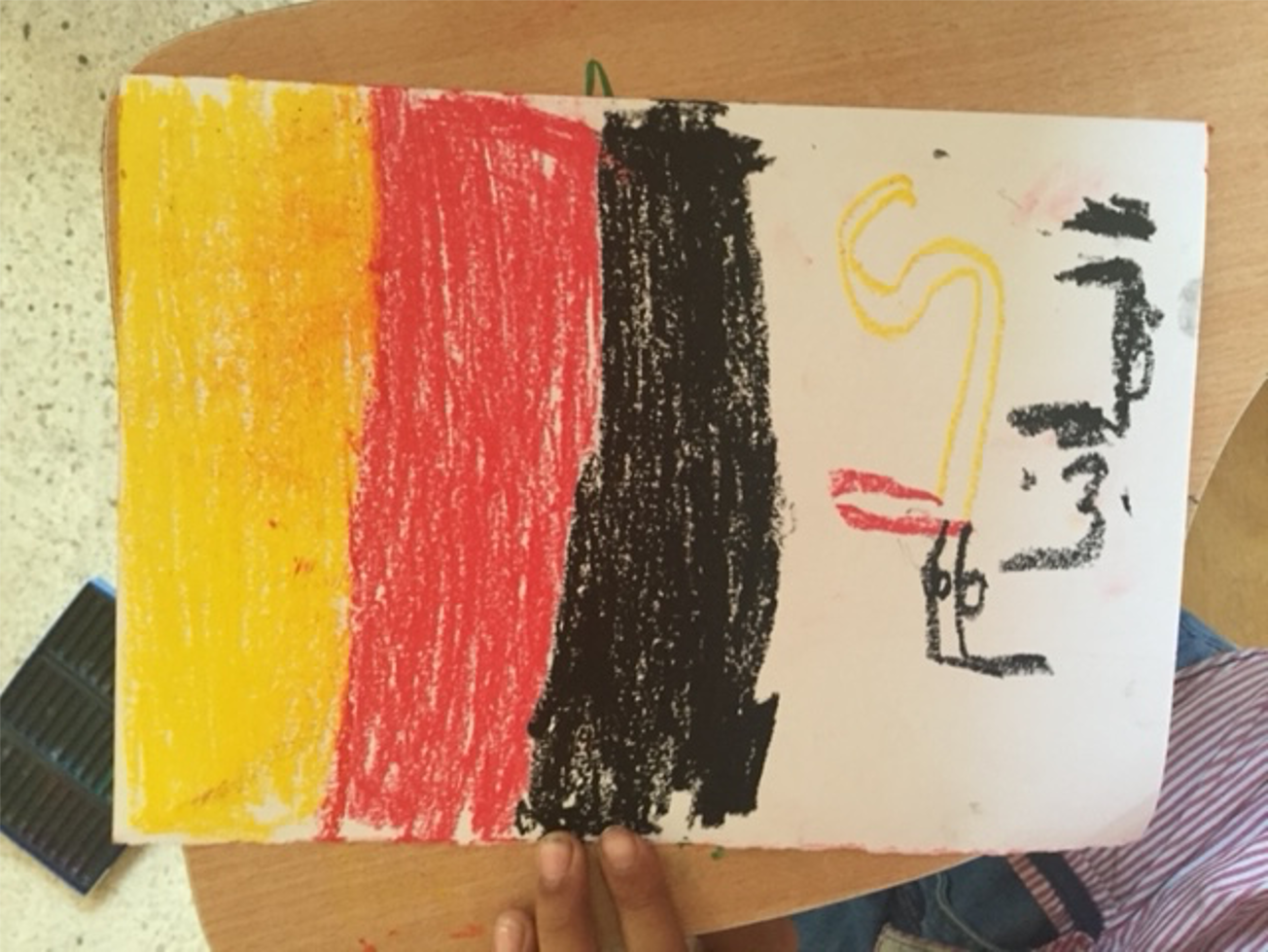 During her trips to Lebanon, Dr. Byers also had the opportunity to work with Syrian refugee children using art therapy. One of the children who participated in her workshop drew his “identity in the patriotism of his country,” she said. “He colored in those stripes that had meaning for him to show solidarity with his family.” Dr. Byers explained that many people need to hold on to something that gives them a sense of identity in times of uncertainty. “This is a concept of Confidence building in themselves—the fourth “C”—not to polarize what’s happening, but to regain a sense of purpose within a community,” she said. 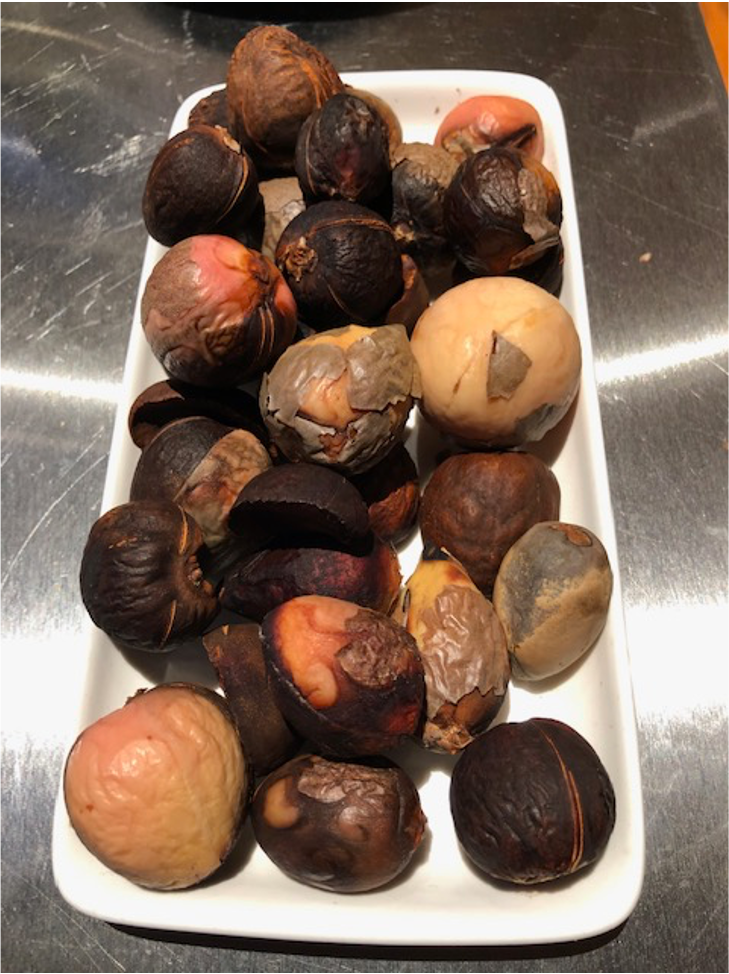 Lastly, Dr. Byers explained that art therapy is not just for war zone areas. When tragedy happens, families or individuals can also benefit from it. During the COVID-19 pandemic, she created several community groups online to help people who were either isolated or wanted to connect. “When we talk about the arts, it doesn’t mean it has to be some sort of super talented, wonderful artist or musician,” she said referring to the transformation of avocado pits into little birds. “They created something from nothing—no fancy supplies,” she said.  This is what the last “C” is about: Cultivating Community. It’s where positive emotions reign; where you are there for other people with sadness and loss that are turned around into something positive, Dr. Byers explained. 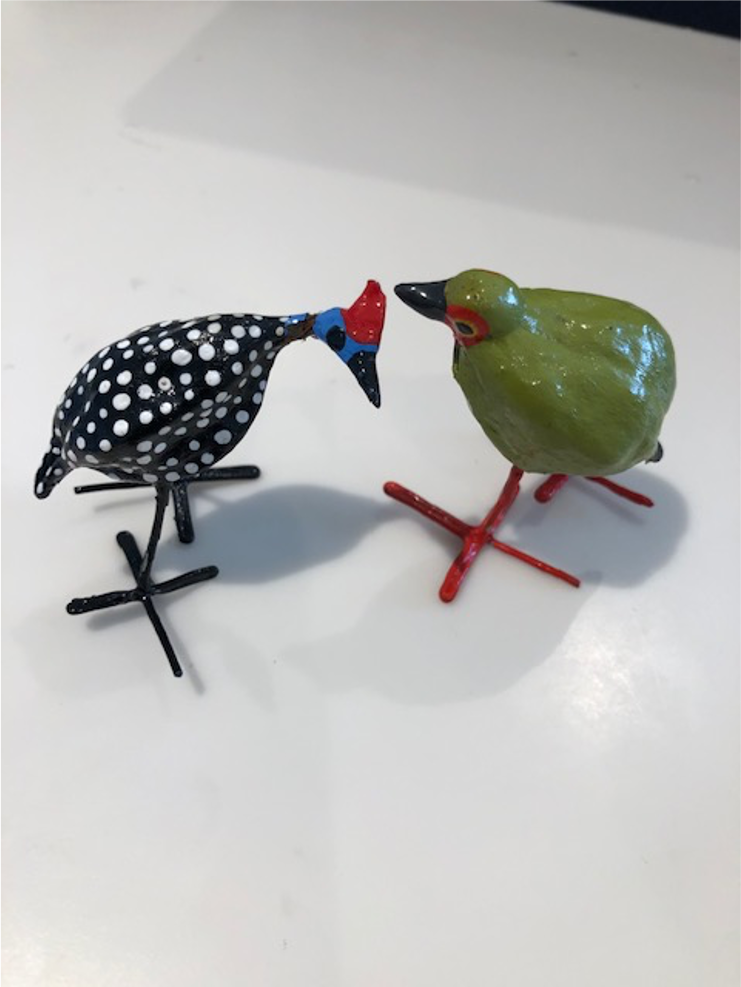 “Art is an opportunity to honor, be prepared and anticipate our strengths and abilities before disasters happen—before horrible things happen, it gets us to the center of who we are,” she said. “It’s art, not for the sake of art, but the sake of a resilient life.”

Founded by the Global Resilience Institute in collaboration with Germany’s Fraunhofer EMI, GRRN is a global membership network of researchers and practitioners collaborating to apply interdisciplinary knowledge to support resilience across multiple sectors. GRRN is comprised of leading universities, institutes, non-profit organizations, and companies from around the world that are engaged in resilience research that informs the development of novel tools and applications.