On January 29th, Dr. Liz Allen, GRI’s Postdoctoral Research Associate, spoke at the Myra Kraft Open Classroom – Climate Change: A Course For Everyone. The weekly course takes place at Northeastern University’s Boston campus and is open to the public, and streamed globally, with the intent to promote climate change education, resilience, and action for all. Previously this semester, GRI’s Founding Director Stephen Flynn spoke at the course on Climate Resilience, along with GRI’s Distinguished Senior Fellow Dr. Atyia Martin and GRI’s faculty affiliate Brian Helmuth. Dr. Allen was invited to speak about the impacts of climate change on agriculture and food systems, as her research has specifically focused on this issue in the Northwestern regions of the U.S. 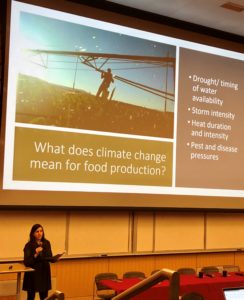 Dr. Allen began her lecture by discussing how people define resilience in different sectors and specified that resilience in socio-ecological systems thinking can support evaluations of the global food system, interpret its vulnerabilities, and establish opportunities for change. She went on to define resilience as “an emergent property of complex systems [which] encompasses not just the ability to withstand disruptions and to maintain function when conditions change, but beyond that a resilient system has the capacity to adapt and evolve as boundary conditions shift.” The global food system has adapted over past centuries in order to support rapid human population growth. Yet, with the industrial revolution, the maximization of land usage, deforestation, and addition of fertilizers for crop production, it has also led to increased CO2 emissions which has created a feedback loop with climate change. Additionally, climate change is increasing the risk of crop failure through increased drought, extreme weather, freezes, and spread of disease in crops increases.

The lecture continued by discussing how initiatives and strategies to promote food sovereignty – that people have the right to define their own food and agricultural systems – can contribute to creating a sustainable and resilient system. “Roughly 40% of the world’s population is currently engaged in agriculture as their primary livelihood,” yet in the developing world this statistic is closer to 65%. Those people will be much more vulnerable to the effects of climate change due to a lack of financial resources, so we must support movements to empower people in developing agricultural production to decrease the impact of the feedback loop and establish resilient systems.

In her closing thoughts, Liz Allen cited that there is currently a shift towards regenerative and locally produced food systems and away from mass food production, in order to combat the feedback loops between climate change and food systems. The specific initiative from the Ellen MacArthur Foundation focuses on shortening supply chains, decreasing packaging, and promoting proper land and fertilizer usage. These types of strategies can help build stronger economies, produce healthier food systems for communities, and – with the expectation that by 2050 “80% of the worlds food will be consumed by populations within cities” – build more resilient cities.

You can watch the recording of Liz Allen’s session at the Climate Course here, as well as other past sessions here. In an upcoming session on February 19th, GRI’s Associate Director of Strategic Research Collaborations, Laura Kuhl, and GRI’s faculty affiliate, Shan Mohammed, will speak about the role of Global Development and climate change. To gain a better understanding of the scale of climate change and to enhance your own education, check out some insightful resources provided by the Myra Kraft Open Classroom here.